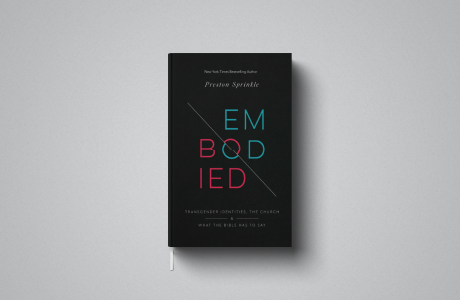 Preston Sprinkle has a rare capacity as an author. On the one hand, he is emotionally warm, personable, people-orientated, empathic and real. On the other, he is scientifically rigorous, clear and theologically coherent. The result is a book that, despite my high expectations and medical background, did not disappoint me in any way. Its pages flow with humanity, understanding and both biblical and scientific truth.

One of the most engaging aspects of the book is hearing of the number of friendships Sprinkle has made with those who identify as trans. He speaks about what he has learnt, including challenges given to him. So, he covers many basics, such as the difference between “sex” and “gender”; but he also speaks passionately about Lesli (or was that Leslie?), who was ushered out of the Church because of their sexuality.

He also does not shy away from the scandal (in my view) of children being sent on a pathway to transition gender, with the most minimal of assessments, and scant attention being paid to the emotional reasons underlying their agony. Or, did you know that SRS (Sex Reassignment Surgery) is relatively common in Iran, as it is seen as more acceptable than homosexuality?

After much careful thought, Sprinkle does conclude that a Christian should never transition genders. He argues that we are God’s creation, and part of the Creator’s intent was to make us male and female – think Noah and the ark. He tactfully reminds us that Jesus had a penis and suggests heaven is likely to be populated with those who show sex differences. After all, God made the body, and the body is good. He argues (rightly in my view) that making up 10,000 genders is effectively an empty token when God has already lain out His plan.

Alongside this, he consistently points out that unless we offer love and community, then we can give all the advice we want, but fail to show Jesus. He says, repeatedly, that we must come alongside others and listen to them; not doing so will not win others.

There are several more problematic areas he deals with, and again his humanity and rigour come through. Regarding intersex, he points out that this is an incredibly rare condition, despite what you might have heard. Just because an exceedingly small number of people have a mixture of male and female parts to them, it does not mean that this creates a new blanket rule for everybody to do as they wish. He also debunks the notion that transsexuals have the brain of the opposite sex. Yet, his humanity shines through, repeatedly saying that we are talking about people rather than someone with an intersex condition.

One chapter that stood out for me was his treatment of transgender and suicidality. Sprinkle defines self-harm and suicide before looking at the relationship between trans feelings and mental illness. He reveals that rates of mental illness in transsexuals are much higher than the general population, and this alone counts for at least a large part of the increased rates of suicide. This is very much in contrast to the “gender-affirming” narrative that if someone has thoughts of being in the wrong gender and does not transition quickly, this will only lead to suicide.

For me, this was a refreshing reminder of much of what I had read before, both from theological and scientific perspectives. It was good to hear it being pointed out that the Bible prohibits cross-dressing, but also to hear it affirmed that it does not demand that men and women behave in gender-stereotyped ways: Deborah led Israel; King David wrote poetry and danced. Although I had read of “cisgender”, I must have switched off from wondering what it meant: not trans.

This is an ideal book both for Christians to read to learn more about transsexuality, and to give to those who identify as trans, irrespective of what they think about God. One struggle it helped me with is in using pronouns which I know are not truthful – for instance, calling a trans man “he”. Sprinkle, as well as discussing Paul’s approach to cultural appropriation, suggests that we practise “pronoun hospitality”.

One of the joys of “Embodied” is that I did not need to read it physically, but instead laid back, thinking about transsexuality, and listened to it on Audible. This was thanks to the audio version being released first. Sprinkle is an engaging listen, and it meant that I could think more about what I was hearing, or even take the dog for a walk at the same time. Of course, the option to go back and re-read is not as simple. Indeed, I come to the subject with a lot of pre-existing knowledge and therefore I am not convinced by how easy a read it will be for others. I suspect that many TFT members will have some background understanding which they will bring to this subject.

“Embodied: Transgender Identities, the Church, and What the Bible Has to Say” by Preston Sprinkle

This book review was originally published in the Summer 2021 edition of the TFT magazine, Ascend. Click the button below to download your copy.