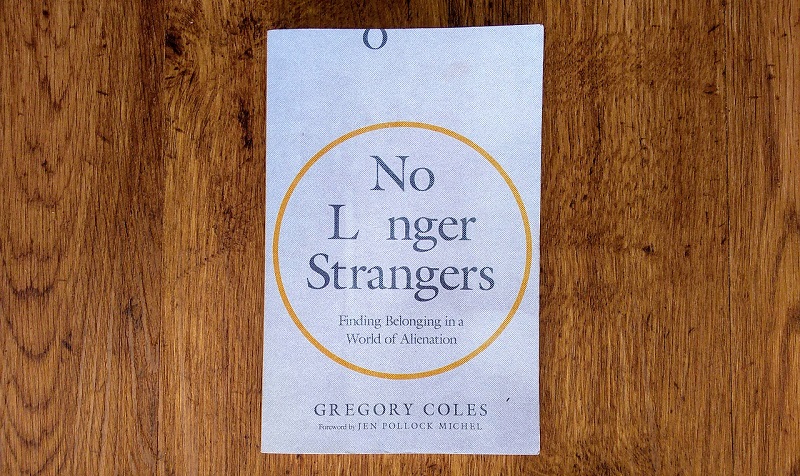 In ‘No Longer Strangers: Finding Belonging in a World of Alienation’, Greg Coles (author of ‘Single, Gay, Christian’) explores what it means for us to belong; where we belong, to whom we belong and to what we belong.

The book is written in a semi-autobiographical style as Greg relates key anecdotes, memories and experiences from his life. The autobiographical sections are interspersed with Greg’s reflections on how he learned to seek God and find his ‘all in all’ in Him. The book is warm, humorous and colloquial in style; it almost feels like having a deep conversation with someone over coffee rather than wading through a theological tome. But it by no means lacks meaningful theological content. Greg has a great deal of biblical wisdom to share, that has clearly been gained through years of tough and precious experience, trusting in Jesus.

Greg was born in the US and his early years were spent ‘roving the contiguous United States in a brown van’, as his parents were part of the Jesus Movement, which necessitated a nomadic lifestyle. When he was three years old, the family moved to Bandung in Indonesia to pursue a calling from God, whilst taking periodic trips back to the US on furlough.

The first part of the book, therefore, focuses on what it means to belong in a place, and Greg draws on his experiences of trying to understand his cultural identity while growing up. Chapter 5 explores some of Greg’s struggles with coming to terms with his sexual attractions as a teenager, and his observations of how some Christians can embrace a ‘gospel of uniformity’ and observes ‘…the gospel of uniformity isn’t actually good news. Or rather, it’s only good news for the people who already fit the bill, the people who can be fully honest while also remaining in the majority by every meaningful measure.’ But he then points out ‘But God – the real God – has only ever been interested in loving us, redeeming us, in transforming us. He has no interest in an army of clones…’

Part 1 of the book ends in chapter 7, with Greg thinking about how our sense of searching for somewhere to belong is inherently linked with our fall from the garden of Eden, and the fact that if our identity is in Jesus, then this world isn’t our permanent home. He says, ‘Instead of fleeing from something, I think we’re searching for something, pining after an impossibly better world. Homesick for a home that was lost before we were born… There’s a kind of homelessness in the waiting between the first Eden and the second Eden. But it’s not so impossible to belong like an alien in the meantime, once you know what you’re waiting for.’

Part 2 of the book addresses our sense of who we belong with, and our relationships with family and friends, and particularly the family of God. Greg has some interesting observations on friendships; the importance of the different kinds of friendships we can have with people across all ages and backgrounds, and the changing nature of human relationships. He relates several experiences and stories about various friendships that he has struggled with, and also people by whom he has been immeasurably helped, in difficult circumstances. In chapter 12, he points out ‘The people we linger with are the people we grow to love. There is no deep belonging without deep lingering.’ He speaks of the importance of taking time to linger deeply with God and enjoying time to savour belonging with your creator. He also discusses his experiences of belonging in churches, both when he kept his same-sex attraction hidden (or very private), and then subsequent to writing his first book ‘Single, Gay, Christian.’

Part 3 of the book looks at to whom we belong, and Greg speaks more about Christian celibacy, and his experiences of understanding sexuality and belonging, both growing up and more recently. In chapter 18, he writes, ‘I’m not saying that our relationship with Jesus is meant to be sexual. But I also don’t want to make the mistake of skipping over the metaphor too quickly. Our betrothal to Jesus isn’t less than sexual – it’s more than sexual, a promise of love so deep and all-consuming that sex is merely a pale human precursor. Those of us who are celibate have the privilege of announcing this betrothal with our bodies now. We get to anticipate the consummation of heaven with a holy longing on earth.’

Those who dislike anecdotal writing or prefer a more structured prose style may struggle to connect with the book. It should also be noted that the book contains some swearing and, in chapter 18, Greg’s choice of wording might be disliked by some when describing his relationship with God.

Overall, the book explores the theme of belonging in a really warm and engaging way; it’s very easy to read but is full of meaningful help. Greg says in the introduction, ‘…come journey with me. Learn to belong alongside me. Gasp in wonder with me. Let’s be aliens together.’ Greg is a great companion and friend to walk with through this book. If I had to describe it in one sentence, I would say this book is, ‘chicken soup for the soul struggling with identity, loneliness and discouragement amid same-sex attraction.’

This book review was originally published in the autumn 2021 edition of the TFT magazine, Ascend. Click the button below to download your copy.