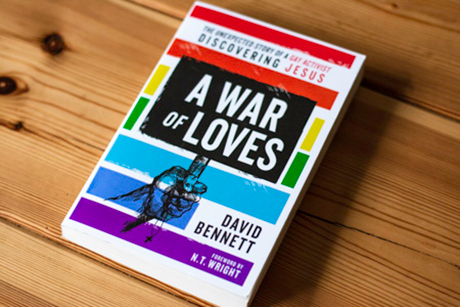 Review: "A War of Loves" by David Bennett

David Bennett describes his life both before and after he became a Christian. He was attracted to other boys from the age of 14, and so had issues with Christianity because he felt if he was to become a Christian he couldn’t act on his romantic inclinations. He became a gay activist in Australia in support of gay marriage. Despite all this, David writes, “Jesus did not stay tidily out of my life.” God reached out to him through friends, at school, his mother, family and teachers.

He searched all manner of spiritualities and religions. He searched verses on homosexuality in the Bible, but he felt it dismissed gay people and he wrestled with the question, “How can being gay and Christian be reconciled?” Yet David came to realise that Jesus really cared and loved people - all people! However he might resist it, the seed of the Christian faith was being sown. Jesus didn’t give up on him.

The book was easy to read, albeit rather deep and theological towards the end.  I liked each chapter starting with a Bible verse to focus the mind. David is open about his boyfriends, his experiences and hurts. He was in a love triangle that was quite exhausting.  He got what he wanted but at the price of a friend: “The pain in my heart was drawing me back to what I termed spirituality. Looking back, I realize my orphan heart was crying out for the love of its Father.”  David didn’t feel comfortable in the gay scene - he wanted a committed relationship with another man.

The highlight for me was David’s conversion, where he experienced the powerful love of God in an Australian bar. I was moved to tears as it felt so like my own conversion; meeting someone in a public place, hearing how much God loves me, being asked “Can I pray for you?” and accepting the offer. The Holy Spirit entered David’s heart in that bar, just as the Holy Spirit flooded my heart in a flat in Southampton back in 1998. John 7:38 says, “Whoever believes in me, as the scripture has said, streams of living water will flow from within him.”

I liked David’s honesty and openness. He longed for intimacy with one friend but was rejected. The book showed his vulnerable side so endearingly that many of us would be able to relate to those feelings of love and rejection.  Maturing as a Christian, he examines his heart and realises his friend was right to back away, but it hurt him all the same.

He has surrendered his sexuality to God, but doesn’t like the term ‘same sex attracted’, as he finds it too medical. I liked his reasoning as to why he calls himself a ‘gay celibate Christian’ - he uses this description because his sexual orientation is a profound part of his story and is the very weakness that gives God glory. He includes the Side A/B/X/Y terminology that I’d never heard before: its purpose is to refer to the various positions on gay marriage and sexual expression. Even so, I’m not convinced that putting yourself in a category is as helpful as it might appear.

After careful study, he saw God’s vision of marriage as beautiful and his views on marriage became biblical. He feels celibacy is a positive alternative to marriage and that the church tends to worship the family above God. I could see where he is coming from, having been single for years, sometimes feeling isolated in a couple/family focussed church, especially when I was feeling down. What impressed me whilst reading this book is how David is on a faith journey, constantly learning, being challenged by the Word of God, growing in maturity.  I love this quote from the book, “The opposite of homosexuality is not heterosexuality, it is holiness.”

He speaks of reaching the gay community with the gospel and I feel he has a real gift in evangelising them. He does it in a non-threatening, loving and gracious, non-condemning way.  We can learn from him! He presents us with challenges and two are worth noting. Are Christians doing enough about reaching the LGBTQI community?  How able and willing are we as SSA Christians to tell our stories?

I would recommend this book to both men and women.  It is well written, biblically sound and suitable for the TFT readership and beyond, but I’m surprised that he never mentions TFT.  This book could be used as a tool in reaching the LGBTQI community if done sensitively. In closing, David writes “This is the Christian way – utterly human yet full of God’s Spirit. This is the war of loves. And day by day, tear by tear, heart by heart, it is being won.”

"A War of Loves" by David Bennett

This article was published in the Spring 2019 edition of the TFT magazine, Ascend.