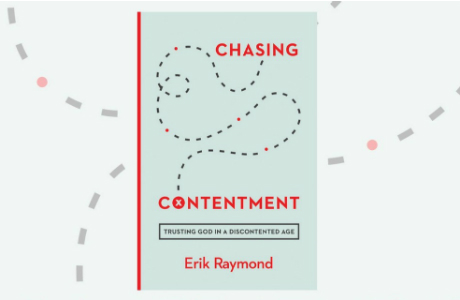 This insightful and thought-provoking book is apt for our spiritually hungry age where both Christians and non-Christians are easily caught out by searching for contentment in the wrong places.  The book comes out of a particularly testing time in Erik Raymond’s ministry in the US and so, reassuringly, the book was borne of personal experience.

The book is in two parts with helpful questions at the end of every chapter to recall what you’ve read. Raymond starts by exploring what contentment is and what it is not. He draws on two Christian writers - Jeremiah Burroughs and Thomas Watson, both of whom wrote about contentment in the 17th Century. This gives a helpful, historical depth to the book which reminded me that there have been countless Christians who have struggled with contentment and satisfaction through the centuries.

Interestingly the author writes about the contentment of God.  I hadn’t thought of God being content. Raymond shows that God is fully self-sufficient.  He created out of abundance, not out of lack.  This is actually central to content because it shows that we can only be truly content if we look to Him, the source of contentment so that we may have “life in all its fullness”.

The second part, “Learning Contentment”, is a no-nonsense, spiritual health check.  It starts with the premise that we become discontent when we lose touch with God.  We forget that we are in His hands and we start to look elsewhere for satisfaction, focussing on our discontent instead of the goodness of God.  (Later on the author also lists unsettling circumstances which can put us off course).  Here Raymond is really quite harsh, so if you often grumble or complain – look out!  There is a chapter on sin and grace followed by a very practical one on cultivating spiritual disciplines with a healthy diet of daily prayer and Bible study.  This includes the author’s own daily timetable drawing from Keller and Calvin.

One of the strengths of this book is the number of quotes from other authors with footnotes.  It’s a short book, but there is plenty of further reading that can be done.

The most helpful chapter to me was “See Through the Shiny Wrappers”.  This is possibly the most relevant chapter to those of us who struggle with same-sex attraction.  Most of us are familiar with the “Did God really say?” passage in Genesis where the crafty serpent sows the seed of doubt in Eve’s mind. Raymond points out that at that point Adam and Eve were fully content and didn’t want for anything, but the serpent sought to derail this completely.  The author then analyses this “worldwide battle and a demonic agenda to stir up discontentment”; it is precisely in deconstructing the mechanisms by which we are tempted that we can learn to avoid it, or at least try.  This approach has certainly helped me to understand where my weak points are.  He then unpacks “temptation’s lures” listed in 1 John 2:16.  Again the directness is helpful and this is balanced by the promise that we can “collapse on the God who abides forever”. Raymond’s writing is inspiring, instructive and filled with reassurances.

The book has a strong US Baptist flavour which was a problem at times, particularly Raymond’s thoughts on “the doctrine of God’s Providence”. I didn’t know it as a doctrine as such and Raymond comes very close to saying that everything that happens is within God’s provision including suffering. Raymond’s style is very direct so I had to persevere with this section. Another concern was his repeated statement that Christians get distracted by creation rather than the creator.  He means ‘created things’, but his statement was just a bit annoying for an environmental Christian!  Surprisingly Raymond only refers to the Holy Spirit a couple of times, but this doesn’t devalue the book.  At least there are lots of references to grace.

This book would be useful to study as a group especially in the context of same-sex attraction, but also if you are wanting to think about where we are as Christians in a largely secular society.  It is a spiritual health check containing difficult truths so it is not for the faint-hearted.

Reading this took me on quite a journey and it reminded me how deeply unfashionable the Christian life is. We are called to deny ourselves! We really are swimming against the tide of Western culture.  We need books like this which are direct and pithy, yet filled with truths we need to hear again.  It’s so easy for us to ignore the shiny wrappers, lose discernment and forget that ultimate contentment is found in the One who created us to be content in Him.

This book review was first published in the Spring 2018 edition of "Ascend", the TFT newsletter.